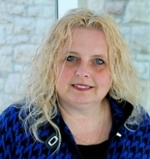 Squeezing just a little bit more out of each day—that seems to be Dr. Dawn Wallin’s preferred approach to managing her administrative responsibilities, her research program, and her life. Luckily for CSSE, Dawn was able to squeeze in time for a quick chat–in between meeting with a grad student, an unspecified administrative crisis, and about a million meetings. The reasons for her successful career are soon apparent: during the interview she moves effortlessly between her many roles, elucidating her research, relating anecdotes, and dispensing advice, achieving more in a 15-minute conversation than many people do all day.

Dawn is currently in her fourth year as Associate Dean of Undergraduate Programs, Partnerships, and Research at the College of Education, University of Saskatchewan. Originally from a rural Saskatchewan community, Dawn completed all four of her degrees at USask before leaving for an assistant professorship at the University of Texas-PanAmerican. Eager to return to Canada, Dawn accepted a position at the University of Manitoba, where she remained for 13 happy years, before moving back to Saskatchewan. “It really was a homecoming for me,” says Dawn. “It was wonderful to come here and re-connect with so many people, while also re-learning the culture and the environment.”

Dawn admits that her life is not always very balanced, and that from time to time her family has to remind her to step away from work. Part of the challenge of moving from one province to another, Dawn notes, was the need to build new connections and sites of research from the ground up. “Research really is about relationality,” explains Dawn. “Coming to Saskatchewan, I had to be very intentional about building the kind of respectful relationships that are foundational to an ethical research partnership. I’m lucky that my position as Associate Dean positions me well to interact with potential partners, but it definitely is very time-consuming.”

A big part of Dawn’s time is spent supporting and advising early career scholars who are developing a research program. Dawn notes that many agencies are moving away from funding individual researchers, so she coaches beginning scholars to focus on collaborative work, building their networks locally as well as nationally. “One of the first pieces of advice I tend to give,” says Dawn, “is to join CSSE. Go to the conference, talk to people, find out what they do, find a connection with them, so that you can forge those collaborative relationships. CSSE is invaluable for networking.” Dawn notes that research relationships should include non-academic partners, as well, since SSHRC and other funders tend to favour projects that connect with institutions or communities. “The Tri-Council agencies are looking at impact,” Dawn explains. “They now expect researchers to bring together multiple funding sources, with multiple partners, so that the project has the greatest possible impact. Understanding this shift is key to successfully advancing your research program.”

Like many institutions, the College of Education at the University of Saskatchewan offers a lot of extra support to early career scholars. Dawn and her team ensure that new scholars are mentored, that they have access to some initial research funding, and that they understand the nature of the research cycle. Building relationships, the essential first step of any collaborative relationship, takes time. As the momentum of a research program builds, the College continues to provide support and guidance, noting that it takes time and relationship building to produce the research record that is so important for new scholars. Emphasizing immediate publication without attending to the proper foregrounding of the initial research cycle is often an unrealistic expectation, Dawn insists.

Support for new scholars can come from within the institution, as at the USask College of Education, or from a broader network such as CSSE. Dawn has been a CSSE member for all of her career, and served in nearly every executive role in the Canadian Association for the Study of Educational Administration (CASEA), several leadership roles in the Canadian Association for the Study of Women and Education (CASWE), and as VP Anglophone for CSSE. Dawn’s many contributions were formally recognized in 2017, when she received CASEA’s Distinguished Service Award. Dawn comments that “CSSE initially helped me to establish a national network of research connections. Beyond that, though, getting involved on the CASWE and CASEA executives put me in touch with people in a different way, allowing me to advocate for a body of scholarship that is important, and to help other scholars in the ways that others helped me.” Dawn notes that meeting scholars in person allows us to understand why they are writing what they are writing, affording a deeper understanding of who they are and building a connection to the person behind the ideas.

Much of Dawn’s own research program focuses on gender issues and how they play out within the academy and in the field of education more generally. Senior leadership roles such as university presidents, Tier 1 Canada Research Chairs, deans, and department heads are still dominated by males. “The discourse of gender is still shaping who is admitted to the halls of power,” says Dawn, noting that both women and men need to question whether the academy is making as much progress as it ought in terms of gender issues. Search committees, for example, may feel that it is no longer necessary to give special consideration to women candidates. “We all, men and women, need to examine the ways in which we have been coopted by the neoliberal agenda that insists the playing field is currently level—clearly, it’s not.”

Dawn, along with her colleague Janice Wallace, published a new book earlier this year, Transforming Conversations: Feminism and Education in Canada since 1870. What excites Dawn the most is that the book showcases the voices of many differently positioned women, including Indigenous feminists and newcomer feminists. “The book situates us in this place and space where we are engaging with critiques of Western feminism, yet also allows us to acknowledge that some progress has been made, that feminism has gotten us somewhere. I find that highly encouraging.”  The book can be ordered online from McGill-Queen’s University press: https://bit.ly/2DbmATc

Dawn’s final words of advice to members of the CSSE community? To do good work together, to recognize and celebrate our commitment to the service-oriented field that is education, and to value CSSE as an organization that sustains and promotes our scholarship. Definitely words to live by!